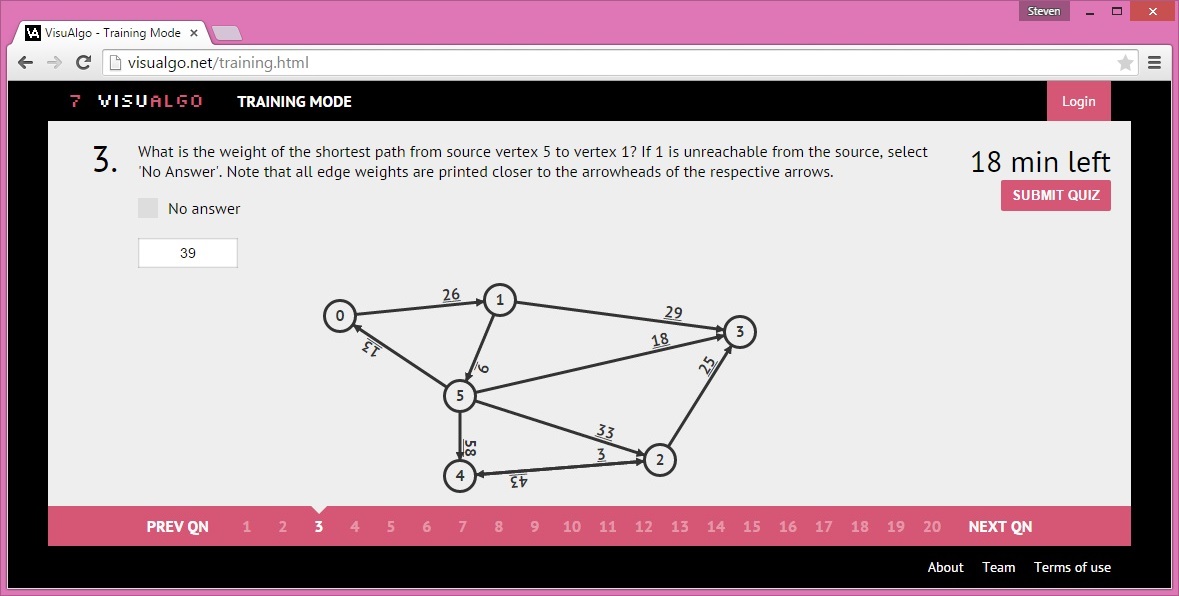 VisuAlgo (http://visualgo.net) is a website developed by a team of staff and students of School of Computing, National University of Singapore, the host of the 2015 ACM-ICPC Asia Singapore Regional. VisuAlgo visualizes a number of popular data structures and algorithms in the Computer Science curriculum. Currently, it receives approximately 2000 hits/day from CS students and instructors worldwide.

One new feature of VisuAlgo is the online quiz. As an example, the above figure shows a question about the classic Single-Source (Single-Destination) Shortest Paths problem in graph theory. The beauty of this online quiz feature is that the question parameters are randomized. The drawn graph G is taken from a collection of hundreds of directed weighted graphs (with their 2-D layouts) in VisuAlgo’s internal database. The graph G has $V$ vertices numbered from $[0..V-1]$. The source vertex $s$ and the destination vertex $t$ are selected at random from $[0..V-1]$.

However, such randomization of the question parameters may produce either a trivial question (e.g. “No Answer” when $s$ and $t$ are disconnected, $0$ when $s = t$, simple tracing of a path if there is only a single unique path from $s$ to $t$ as shown in the above figure) or insanely difficult question to be computed manually if there are too many possible shortest paths from $s$ to $t$.

The developers of VisuAlgo want to calibrate such Shortest Paths question with randomized parameters so that it is possible for a normal Computer Science student to answer the randomly generated question manually within a reasonable amount of time. Please help them.

Thereafter follow $E$ lines, each describing the directed weighted edges in G by three integers $0 \leq u, v \leq V-1$ and $1 \leq w \leq 99$ (VisuAlgo limits the edge weight to be at most 2 characters for visual aesthetic purpose), where $u$ and $v$ are the vertex numbers and $w$ is the weight of the directed edge $u \rightarrow v$. It is guaranteed that G is a simple graph without self-loops or multiple directed edges with the same direction between the same pair of vertices.

Print a line with the number of different shortest paths between $s$ to $t$ in G. Two shortest paths $p_1$ and $p_2$ are considered different if there exists at least one edge in $p_1$ that is not found in $p_2$. It is guaranteed that the answer fits in a 32-bit signed integer data type.